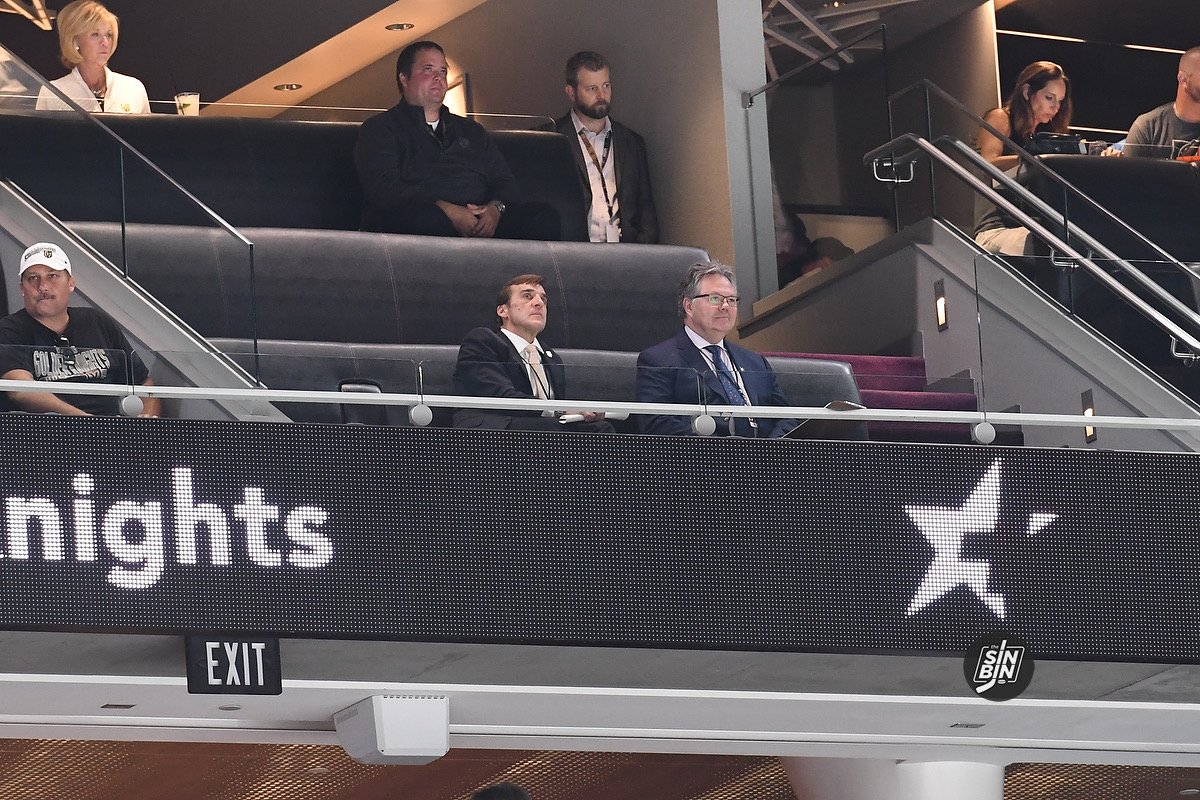 The Golden Knights entered this past offseason with a Stanley Cup caliber roster. They were stacked at forward, coming off a season where they finished among the league’s best defensively and had a bevy of prospects coming up, and still had one of the best goaltenders in the world.

However, there was too much money on the books. The CBA allows teams to exceed the salary cap by up to 10% during the offseason, but they must get back down under the cap on the first day of the regular season. So, Vegas needed to shed some money, and thus, a few players.

The conventional wisdom would have been to start by singling out the players with the highest salary coupled with the lowest performance expectations for the 2019-20 season. Send those guys packing, get under the cap, and head into the regular season with as dominant a team as possible.

The Golden Knights opted for a different route, one that may have ended up working out even better, though it came with risks, a bit of a price, and ended up costing a head coach his job.

The trades in many respects brings full circle the strategy that we went into the offseason with last year in a situation where we were over the salary cap. We had to make some decisions that involved veteran players, roster players, and we wanted to acquire draft picks in return to build capital for decisions and moves just like this. -Kelly McCrimmon

That’s the official explanation of the Golden Knights strategy. Let me explain it in more detail.

In moving contracts during the Summer to become cap compliant, the Golden Knights strategy was to harvest as many draft picks as possible. They traded Colin Miller for a 2nd round pick. Nikita Gusev went for a 2nd and a 3rd. And Erik Haula was moved for a young player in Nic Roy and a 5th. Instead of trying to make their roster better before opening night, they wanted to create a bank of “capital” they could cash in 145 days later at the trade deadline.

The thinking is fairly simple, yet when the onion is peeled back, there’s a lot more to it. The simple idea is that having this bank of capital will allow the team to make moves and improve their team at the deadline without having to sacrifice any significant players off the roster in season. 145 days, 62 games, and a heck of a lot of hockey will give them a better understanding of what the team needs in order to win the Cup than they had back in June and July. Tear it down now so we can rebuild it more intelligently later.

And that’s exactly what they did. They turned those “bank of capital” picks into Chandler Stephenson, Alec Martinez, Robin Lehner, and Nick Cousins, while only having to give up Cody Eakin off the roster.

It looks like a significant roster upgrade at the deadline, but in reality, it’s just replacing what they had eight months ago.

Here, take a look at how it all broke down from June 27th to February 24th. 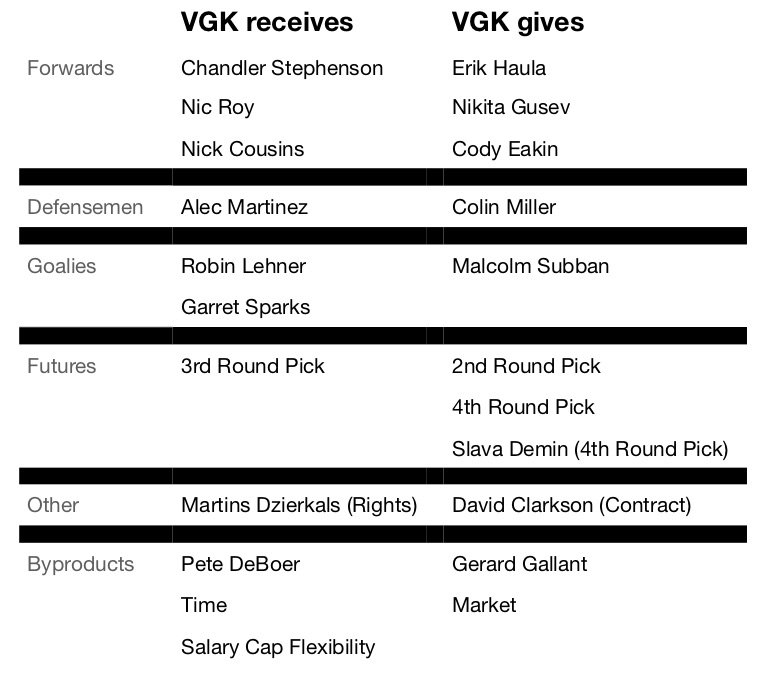 Are they better? Maybe. That’s up for debate and the answer is probably yes but no matter which side you land on, it’s fair to say, it’s not significant one way or the other. But one thing they are for sure is different. The upgrades came at goalie and on defense while downgrading on offense.

Would that have been the decision in the summer? Probably not, which is where all the other pieces of the puzzle come into play. (Those are what I’ve listed in byproducts in the trade above.)

Every day of the eight months between the Haula trade and the deadline deals to add Lehner and Cousins the Golden Knights were acquiring information. They were able to watch their team play. They could see what was going on around them (mainly the fact that the division is trash and the conference isn’t much better). They got to evaluate the seasons of every veteran player on the roster as well as the rookies. They knew what their injury situation would look like with less than 20 games left in the season.

That has value. Potentially a lot of value. Think of all we know that we didn’t before the season started. It’s a ton of information and it’s great information.

But, it does come with a risk. The Golden Knights purposely got worse between the day they were eliminated by the Sharks and the day they played them again on opening night. They gave up three useable players and replaced them with Nic Roy (who they knew wasn’t going to be much more than a 4th liner this year). They were gambling that the team they left in place was good enough to stay in the race over the first 60 games of the season. If there was a big injury or underachievement, that bank of capital can’t save them. To cash in those futures, they had to still be afloat, and looking back, mission accomplished, but not without a few sweaty palms (and a fired coach, which we’ll get to in a minute) along the way.

(If you want to really dig into how this all went down, read this.)

By waiting until the deadline, the Golden Knights essentially created about $4 million of cap space compared to what they would have been working with during the offseason. They used it to make the deals for both Martinez and Lehner possible. In the offseason, they couldn’t pay $4 million for a defenseman and another $5 million for a goalie. They would have had to choose one or the other or subtract from the roster in another area.

There’s solid value in that… even if it cost Roy, Hague, Glass, and Whitecloud a pretty penny along the way.

Most years, but this year especially, the market for buyers is more competitive at the trade deadline than it is in the offseason. Vegas paid a bit of a price because of this.

They got minimized returns on Haula and Gusev (and maybe even Miller had he played like he did in Vegas instead of Buffalo) while paying an increased price on Martinez, Cousins, and Lehner (he was technically free in the offseason as a UFA).

The net value of how much they lost here is tough to calculate but it’s probably at least a few picks.

The Golden Knights offseason strategy cost Gerard Gallant and Mike Kelly their jobs. As I’ve presented before, the Golden Knights willingly made their roster worse and then fired a pair of coaches because they weren’t winning as many games as they were expected to.

The purpose of this article is not to discuss whether the Golden Knights got better or worse with the switch (which is why I put it on both sides), it’s just to show that the strategy had repercussions.

In the offseason, they had a Cup contender. Now, they have a Cup contender. In between, they didn’t. That was the strategy and it worked, or at least it looks like it worked with 18 games left on the schedule.

Personally, I killed the Golden Knights front office the entire offseason and through much of the first 4 months of the season over their tear down in June and July. Now, I’m here to say I semi-apologize.

I still believe there was mismanagement of assets, misevaluation of talent on the roster and in the system, and a hasty firing of the head coach. All of them combined have damaged the team both short-term and long-term, but my apology is for the mentality surrounding the offseason.

At the time, it appeared like the Golden Knights were not willing to throw their chips into the pot and do everything in their power to supplement their Cup contending team. They seemed to be serving two masters, the present and the future. The main reason I believed this was because George McPhee said it. This is what he said after trading Gusev.

We’re a better team because we had depth in the positions in which we made moves from.-McPhee on 7/29/19

We now own nine picks in the first three rounds of the next two drafts. These picks will help boost our organizational depth and add to our pool of prospects. Although we were not able to make this work I am really happy with where we are at with our roster. -McPhee on 7/29/19

It looked and sounded like they weren’t willing to do anything and everything to help the 2019-20 Golden Knights win the Cup and to me that was unacceptable. That’s why I’ve been so critical of the front office for the past eight months and why I’ve never shut up about Gusev, Haula, and Miller. But now that we can see the “full circle” it’s only fair to walk back my anger and frustration and chalk it up to ignorance.

Information leads to understanding and we now have it. The Golden Knights are trying to win and win now. And you can’t ask for any more than that.

(Except for better decisions, which is why it’s only a semi-apology, but hey something’s better than nothing, right?)