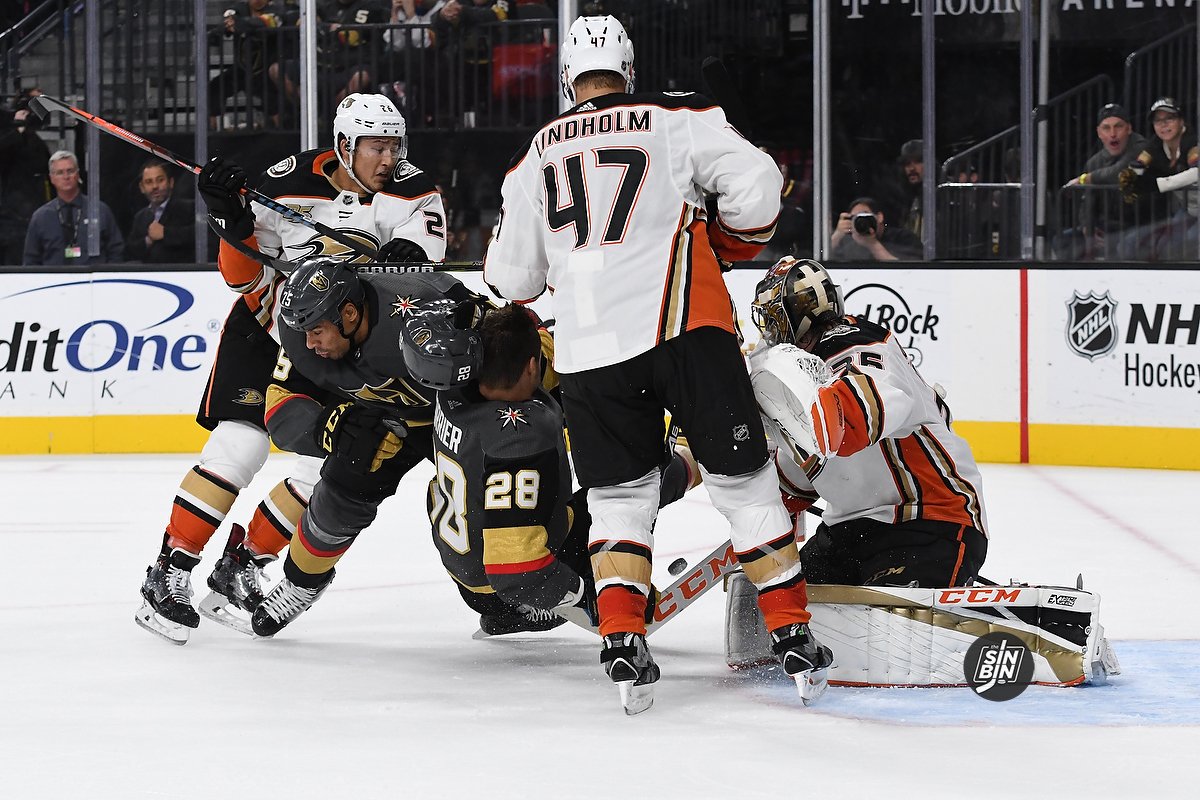 19 games into the 2021 season, William Carrier and Ryan Reaves have combined for a total of two points while being on the ice for 372 minutes.

The two have a combined -7 rating, have cost the Golden Knights 0.7 points in the standings according to Hockey-Reference.com’s point shares stat, and each post an expected goals share of less than 43% (the team number is over 52%).

To put it politely, they haven’t been good offensively to start the season. That shouldn’t come as much of a surprise, but this should. No player on the Golden Knights has started a higher percentage of shifts in the offensive zone than Ryan Reaves. Reaves has started a massive 57.6% of his shifts in a positive position while his linemate, Carrier, isn’t far behind at 55.3%, good for 4th on the team for forwards.

So, Reaves and Carrier start closer to the opposing goal more often than anyone on the team, yet have failed to score a single goal, have been on the ice for just four goals (three for Carrier), and have allowed seven. They are below 50% shares in every advanced metric including Corsi, Fenwick, shots, expected goals, scoring chances, and high danger chances. In other words, they give up more than they create, by every measurable, despite starting in more advantageous positions than anyone else on the team.

But wait, there’s more! It gets worse… WAY worse, when we look at the seven most important games of the season.

Vegas has played St. Louis, Colorado, and Minnesota a combined seven times in the first 19 games. In those games, Carrier and Reaves have combined to go scoreless and pointless, while registering a -5 rating and allowing three goals while being on the ice for zero goals for. Again, not good.

In those games, the pair started an absurd 81% (Reaves) and 84% (Carrier) of their shifts in the offensive zone. The Golden Knights took 91 defensive zone draws in those seven games, Reaves and/or Carrier were on the ice for six of them. That means one of those two was on the ice for just 7% of defensive draws while they accounted for more than 20% of Vegas’ offensive draws.

I went back and looked for every draw analyze the situation on each of those six draws. On three of them, Reaves was forced to remain on the ice due to an icing call, Carrier joined in one of those three. Another, Carrier was sent out in a 4-on-4 situation with 39 seconds left in the 3rd period of a game Vegas led 3-0. Another, Reaves and Carrier had just hopped on the ice, were out there for eight seconds and there was a stoppage, they stayed on for the subsequent draw. That leaves one draw where Pete DeBoer purposely put Reaves and Carrier on the ice in the defensive zone. One out of 91.

Yet, despite starting more than 90% of their shifts in the offensive or neutral zone, Reaves and Carrier managed to attempt a combined nine shots on goal in more than 60 minutes of ice time a piece and they still put up below 50% numbers in every advanced measure as well.

This to me is asinine.

Pete DeBoer is purposely using his worst offensive players in the most advantageous situations.

Normally, you’d want to place your best offensive players in these situations in order to give them the most opportunity to score. However, DeBoer is doing the opposite and there’s really only one explanation that makes any sense.

He does not trust Reaves and Carrier can get out of their own zone if they start there.

Just once, in seven important games, did DeBoer purposely place Reaves and Carrier on the ice to take a defensive zone draw. Yet they still managed to allow 20 high-danger chances, 32 scoring chances, and three goals while out there in those games.

It’s clear DeBoer believes they aren’t capable of starting in their own zone so he protects them with massive numbers of offensive and neutral zone starts, and they still can’t outplay the opposition. They are either the worst, or in the bottom five, on the team in every category while being afforded the most positive situations and playing against the weakest competition.

A change is needed. Either in deployment or in personnel.

600 games of Reaves and 200 games of Carrier should be enough to prove they aren’t ever going to be legitimate scoring threats in the NHL. So, if they can’t be leaned on to keep the puck out of their own net, they shouldn’t be in the lineup at all.

If the plan is to give 80% offensive zone starts to fourth liners, it’s time to find some who can score.