A few hours ago TSN released its annual list of the top 5o prospects in the NHL. It should come as no surprise that the Golden Knights are well represented on that list after having three picks in the top 15 in last year’s Entry Draft. 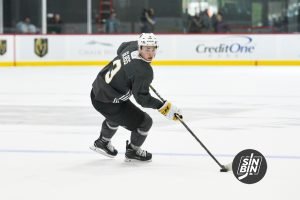 Coming in ranked the highest for the Golden Knights is Cody Glass, the 6th overall pick in the draft. He’s now ranked #4 by TSN. Glass has been absolutely tearing up the WHL with the Portland Winterhawks tallying 69 points in just 45 games.

Next up is the diminutive Swedish defenseman, Erik Brannstrom who was ranked #20. Brannstrom wowed at Development Camp here in Vegas before going on to win the silver medal with Team Sweden at the IIHF World Juniors. He’s currently playing in the Swedish Elite League which does not have a maximum age restriction meaning he’s playing in a league much closer to the NHL than Canadian Juniors. Therefore, his numbers (0 goals, 8 assists, 35 GP) don’t look nearly as impressive. However, the “un-forecheck-able” defenseman certainly looks like he’ll be a major piece on the Golden Knights future blue line.

Last but certainly not least is the man who ranks #23 on the TSN list, Nick Suzuki. Suzuki has nearly identical numbers to Glass putting up an equal 25 goals and just two fewer assists (42) than his fellow first round pick. Suzuki tends to put up highlight goals and assists as his hands are simply on another level. Look…

He’s also not afraid to throw around the body…

The OHL's leading scorer can bang the body too. pic.twitter.com/u3iSrx4ECG

Oh yeah, and he knows how to do it wearing VGK colors too.

All in all, three prospects in the top 23 is pretty darn impressive, especially for a team who is chasing the President’s Trophy. No other team has more than two in the top 25 and a bunch of teams do not have a single player in the top 50.

As good as this team has been this year, remember, they were built for the future.