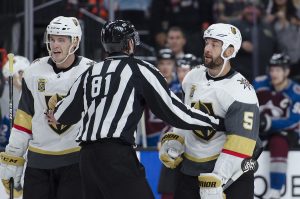 (Reminder: Corsi is all shot attempts, even if they are not on goal or are blocked.)

Yes, you are reading that correctly, Vegas is -62 in Corsi and -51 in shots on goal in the 3rd period.

In just one 3rd period out of 11 games, the Golden Knights had more shot attempts (Corsi) AND more shots on goal (SOG) than their opponent. In the 22 1st and 2nd periods, Vegas has done it 12 times.

I’ll readily admit stats don’t always tell the story, but these ones are not just a flash in the pan. The Golden Knights simply do not have the puck in the opposing zone as often in the 3rd as they do in the 1st and 2nd, and it’s led to a -8 goal differential and -62 Corsi differential in the games final stanza. That likely has a lot to do with this…

If you watch carefully, you can see exactly what Sbisa is talking about. In the 3rd period, the Golden Knights play a slightly more conservative game, specifically in the neutral zone. Rather than being aggressive and challenging for pucks, they back off a bit to avoid allowing odd-man rushes. What ends up happening is that the opponent gains the blue line easier and Vegas ends up hemmed in their own end for extended periods of time.

The biggest challenge the Golden Knights have had as a team (aside from keeping goalies healthy) has been their inability to get the puck out of their own zone when all 10 skaters are beyond the blue line. It’s the number one thing they work on in practice, but it has consistently been a problem to this point. In the 3rd, when they lose their aggressive nature in the neutral zone, the opponent does not have to work as hard to get into the Golden Knights zone, and once they are there, they feast.

That’s the easiest explanation for the disastrous -62 Corsi differential. It’s not a secret either, Gallant talks about it all the time after games. The question is, why does it keep happening?

And for that one, I will channel Turk and say, “no idea, seriously.”