Hockey games are 60 minutes long, we all know this because coaches, players, and management tell us in every answer no matter the question. However, sometimes there are tiny moments inside of games that stand out amongst the rest of the game, and the winners of those moments, win the game. 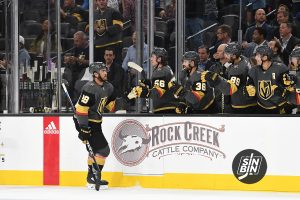 Hey everyone, look how good we are! (Photo Credit: SinBin.vegas Photographer Brandon Andreasen)

That was the case last night at T-Mobile Arena when the Golden Knights upset one of the NHL’s best, the Chicago Blackhawks.

Moment #1 (17:27 left in the 1st Period – VGK 0 CHI 1): The Blackhawks took a 2-minute tripping penalty 3:01 into the first period. 32 seconds later, a spill at the blue line by Nate Schmidt sent the Blackhawks a break and they scored a shorthanded goal. 3:33 into the game, the best team the Golden Knights have faced all season had just flipped the script on a power play and were in position to take control of the hockey game, much to the delight of about 70% of the crowd. Heck, I even tweeted this…

And it's a shorty goal for Chicago. Yikes, this thing could get ugly in a hurry.

But the Golden Knights still had nearly 90 seconds on that power play, one that instantly became “Moment #1” of the game. They didn’t necessarily need to score, but they had to rescue the game over the next five minutes to keep the belief (especially of the goalie making his first career start) that they could still win. 21 seconds later, a shot from the point by Colin Miller gets tipped by William Karlsson, and the game was tied. There was a collective deep breath from the entire team. The game was back even, and the inevitable spiral appeared to be put back on delay.

Moment #2 (2:00 left in the 2nd Period – VGK 2 CHI 1): Brayden McNabb had just laid a monster hit on Nick Schmaltz. (Here’s the hit.) Weenie Ryan Hartman got mad and violently slashed McNabb and then grabbed him by the neck because he touched a Blackhawk too hard. That earned Weenie Hartman four minutes in the box, and the Golden Knights had a great opportunity to take a 3-1 lead late in the 2nd.The four minutes came and went, and Vegas got a total of ZERO shots on net during the extended power play. The Chicago heavy crowd was buzzing, and there was a sense in the air that the momentum of the game was about to change.

Then the “fourth” line stepped on the ice. Tomas Nosek’s forechecking caused a turnover deep in Chicago’s zone. William Carrier picked it up, quickly dished it back to Nosek, who from underneath the goal found a wide-open Pierre-Edouard Bellemare, one-timer, goal. 3-1 VGK, and the momentum switch was gone.

I thought we were in a great spot, killing that form in the penalty, but they scored the big goal and it took the momentum away from us. -Joel Quenneville, Chicago Head Coach

Moment #3(12:28 left in the 3rd Period – VGK 3 CHI 1): The Golden Knights had been holding on to a two-goal lead since Moment #2, but there was definitely a feel that the Blackhawks push back into the game was coming. A blocked Luca Sbisa shot sprung Patrick Sharp loose and it looked like 3-2 was a certainty.

But, Oscar Dansk saved the shot and saved the day keeping the score at 3-1. It was the first one-on-one moment the rookie goalie faced, and he (like seemingly every Golden Knight this year) stepped up and did something no one expected. He stonewalled the 4-time 30 goal scorer Sharp.

It’s definitely a nice save to make at that point in the game. Yeah, I just felt composed when he came down, and it turned out good. -Oscar Dansk

Should I remind you that this is a goalie who was playing in his 2nd NHL game, and making his 1st NHL start?

Three moments that all went Vegas’ way. If any of them turned out differently, we could be talking about a much different game, but they didn’t and instead, the Golden Knights are 7-1-0 after eight games. They’ve overcome adversity inside the confines of individual games, now with a six-game roadie coming up, we’ll see if they can do it from game to game as well. (Hint: There’s an article coming on this Friday)