2017 Draft Class Has Had Success In The NHL, It’s Time For VGK To Take The Plunge And Give Pick #15 His Shot

The 2017 NHL Draft was a big one for the Golden Knights. Following the Expansion Draft, Vegas went into their first Entry Draft with three picks in the top 15 and four in the top 35.

Cody Glass, Nick Suzuki, Erik Brannstrom, and Nic Hague were the Golden Knights selections, and between the four of them, they’ve played a total of 0 NHL games 17 months after they were selected.

That’s not common at this point for that draft class, look.

Of course, it’s important to note that George McPhee was likely operating under the belief that his team NHL team was going to struggle, so picking players who were going to make an immediate impact was not a high priority. That being said, 55% of players have made their debuts and Vegas who had three picks in the top half of the 1st round still don’t have any.

With the Golden Knights heading into the season fully healthy at the forward position, Cody Glass did not appear ready out of training camp. He might be considered an option now, but the CHL/NHL agreement forbids Glass’ return to the Golden Knights until his Junior season is over.

McPhee was able to trade one of the three first rounders to help bring back a superstar in Max Pacioretty. Therefore, it’s not to say the return has been completely barren. But, 0 games out of three top 15 picks, when nine of the 12 non-VGK players have cracked the NHL is a bit of a problem. 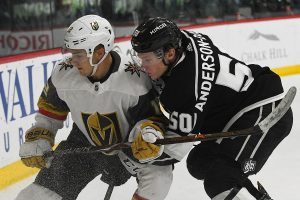 What’s the worst he can do, pinch at the wrong time? (Photo Credit: SinBin.vegas Photographer Brandon Andreasen)

Especially when you consider one of Vegas’ players has had success every step of the way since being selected. Erik Brannstrom has seven points in seven games in the AHL and was the standout defenseman at the rookie showcase “tournament” that was held at City National Arena. Two of the three defensemen picked before Brannstrom have not made the NHL yet, but four of the nine blueliners selected in the 1st round have broken through.

The Golden Knights are struggling defensively and they have just one goal from defensemen through 13 games this season. McPhee always talks about how he prefers to “overcook” his prospects, and Brannstrom might not be as “well-done” as the GM likes. But if he keeps waiting until the “temperature” is right for the young-Swede, his team might be the one that’s cooked before his prospect.

What may not have been the case a month ago now is, the reward far outweighs the risk. It’s time for Erik Brannstrom.