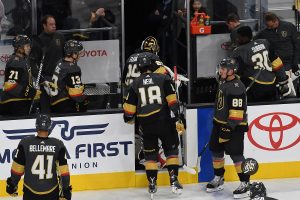 First up is individual defensive efforts. Two plays, in particular, stand out as reasons why the Golden Knights haven’t allowed a goal in 3-on-3 this season. Here they are…

On the first play, Luca Sbisa tracks back to make a great defensive play on the streaking Max Domi. The second is Nate Schmidt doing almost the exact same to keep O’Reilly out.

On both plays, the Golden Knights defensemen used speed, body placement, and stick checks to keep the player on the break from even attempting a shot. There are a few other examples throughout the two overtime periods, including another from Sbisa and one from Reilly Smith. When playing against talented skaters, these are the plays it takes to keep the puck out of your own net.

The second thing the Golden Knights have done extremely well in OT is change lines. Overtime is always played on the long change side of the ice (same as the second period), which makes changing players even more difficult. It was more noticeable against Buffalo, but probably more impressive against Arizona, that not a single time in either period were the Golden Knights caught on a bad change.

Against Buffalo, Vegas controlled the puck for a lot of the period, so they were able to cycle through a bunch of players. On multiple occasions, a Golden Knight purposely carried the puck out of the Buffalo zone to allow for a clean change. In Arizona, it was more of changing without the puck, which is tougher, yet every time they pulled it off and were able to avoid unnecessary odd man rushes.

The final piece of the puzzle has been top-end scoring skill from Perron and Neal. In both games Perron and Neal were the forward pair on the ice when the game winner was scored. In Arizona, it was a beautiful bank pass by Perron to set up the goal for Neal. Against Buffalo it was Neal reading the play perfectly to open up the shooting lane for Perron.

I think James Neal read what I wanted to do extremely well and it helped push the defense back a little bit. It’s either the defense comes to me and then I try and dish it to James Neal or the defense has to honor James Neal and most guys are going to do that because he is such a great shooter. It left me a little more room and I was able to score. -David Perron

It’s an incredibly small sample size, but if Vegas continues doing the first two things, the third one will eventually come most of the time.

Calvin Pickard Comes Out Of Hiding