The Golden Knights made franchise history Saturday overcoming a three-goal deficit to come back and win for the first time. They did it against the defending Stanley Cup Champions and a team Vegas had lost four straight to, the St. Louis Blues.

It was certainly one of the most memorable regular season games in Golden Knights history, so we put a poll on Twitter to see how many would rank it atop the list.

Is that the best regular season win in franchise history?

Of course, posting it 20 minutes after the game ends leads to a bit of recency bias, so I decided to go back through the record books and look for the best regular season games the Golden Knights have ever won. Here are the 14 I came up with.

The first half of the first-ever Dad’s Trip started out well for the Golden Knights as they took a 2 goal lead. With Malcolm Subban in net against his big brother PK, Vegas surrendered three straight sending them into the final minute down a goal. With the goalie pulled, Erik Haula netted the game-tying goal to send the game to OT and eventually shootout. Subban stopped six shootout attempts to help seal one of the most impressive road victories in franchise history.

Things got off to a poor start as Philadelphia spent a majority of the first 10 minutes in the Vegas zone, scoring once, but the tide turned in a hurry quickly after. The Golden Knights scored four 1st period goals to head to intermission at 4-2. Fleury stopped a penalty shot, Jon Merrill scored while playing forward, and Pacioretty scored twice. The game got really interesting at the end as a pair of penalties forced the Golden Knights to kill off a 5-on-3 in the dying seconds of the game. Brayden McNabb played penalty kill hero and the Golden Knights sealed their 3rd straight win of the homestand. 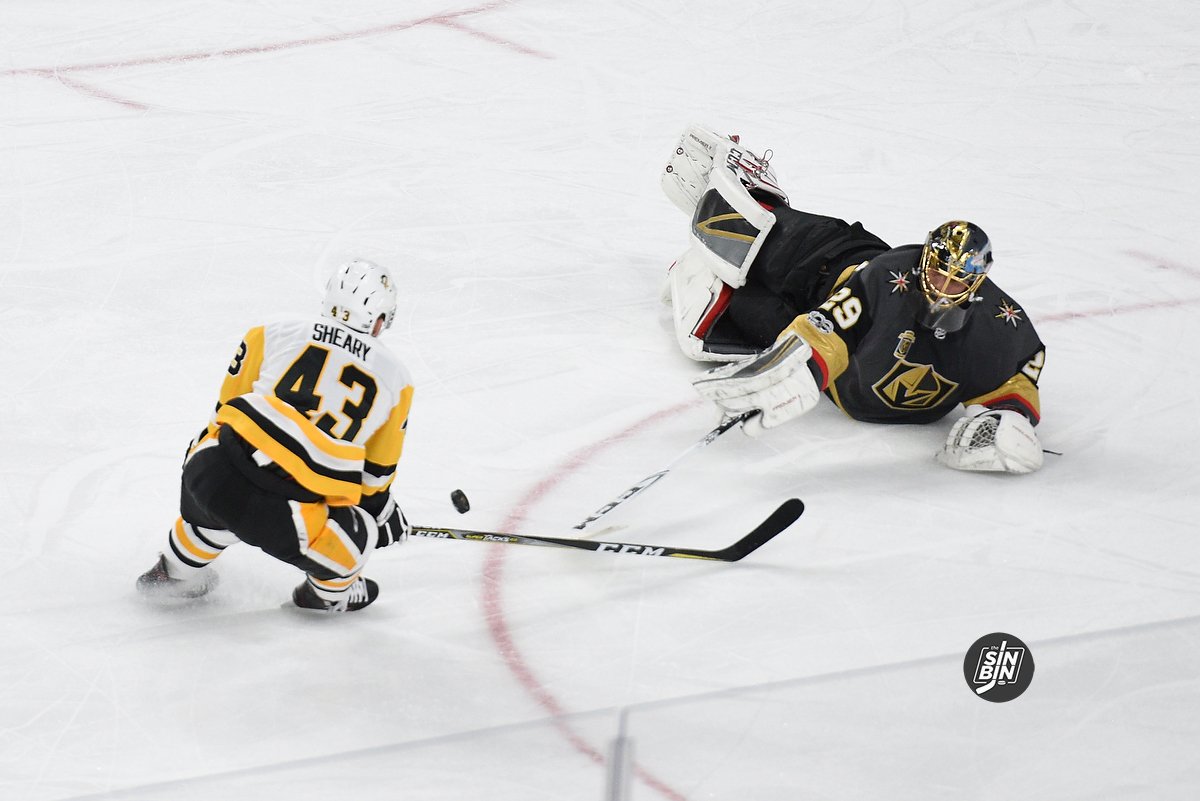 At the time, it wasn’t a guarantee that Marc-Andre Fleury would even be available for the first time his new team would face his old one. He was able to return from injury one game before and made the emotional start against the Penguins. The crowd was fairly close to 50/50 but everyone was cheering for the Golden Knights goalie. A late Jon Merrill goal won the game for Vegas and Fleury allowed just one goal to beat the Penguins.

The Golden Knights were rolling on the team’s first homestand despite losing Fleury a few games earlier. This was a tight game throughout and Vegas used two power play goals to take a 2-1 lead. Then, Malcolm Subban injured his knee and Oscar Dansk was forced to come in and make his NHL debut. One of the first shots he saw tied the game and it appeared it was only a matter of time that St. Louis would put another by him and win the game. But in OT, William Karlsson’s first goal of the year won it for the Golden Knights and the magical run to start the inaugural season continued. 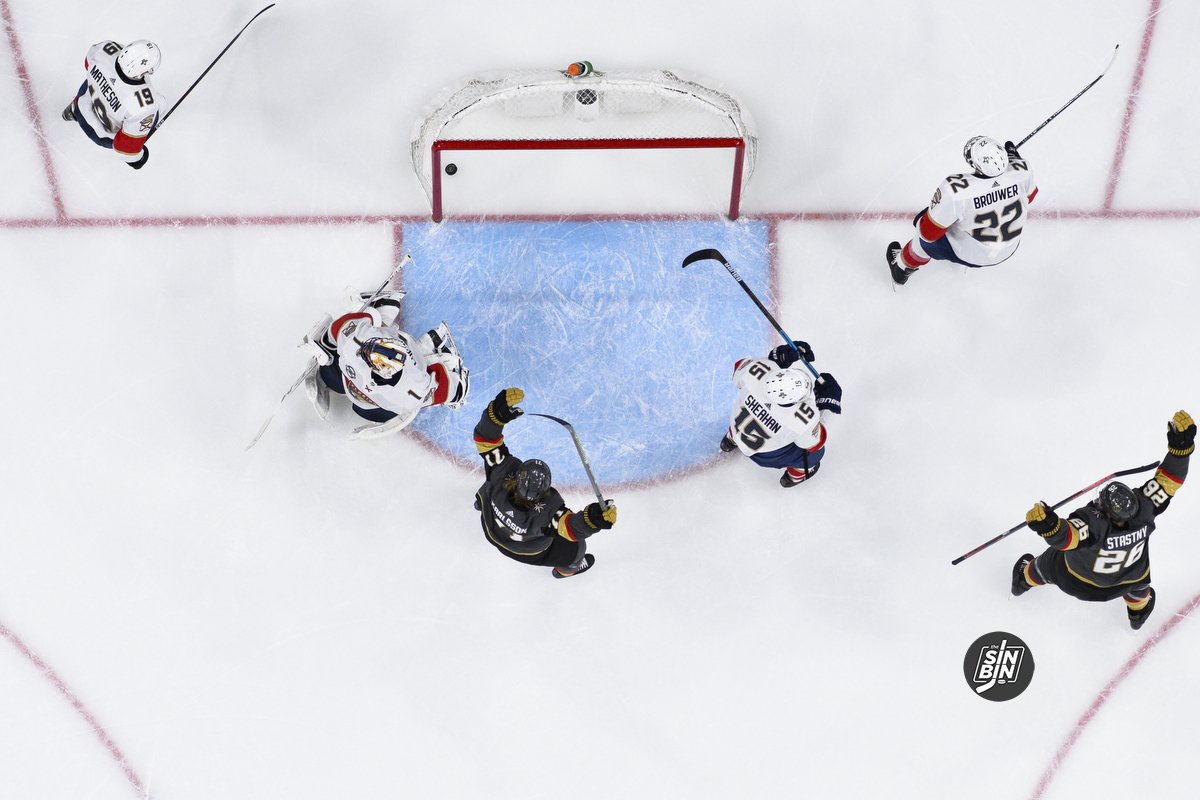 In terms of entertainment, it doesn’t get much better than a game with 10 goals and is decided in shootout. Vegas fell behind 3-1 after allowing two power play goals to Mike Hoffman. The next three goals went to the Golden Knights to give Vegas a 4-3 lead. Florida took a 5-4 lead late into the 3rd but former Panther Reilly Smith tied it up with a shot that fluttered past the goalie and into the net. The shootout was a goalie battle as Fleury stopped all three and Theodore tallied the game winner. It was also Mark Stone’s second game as a Golden Knight 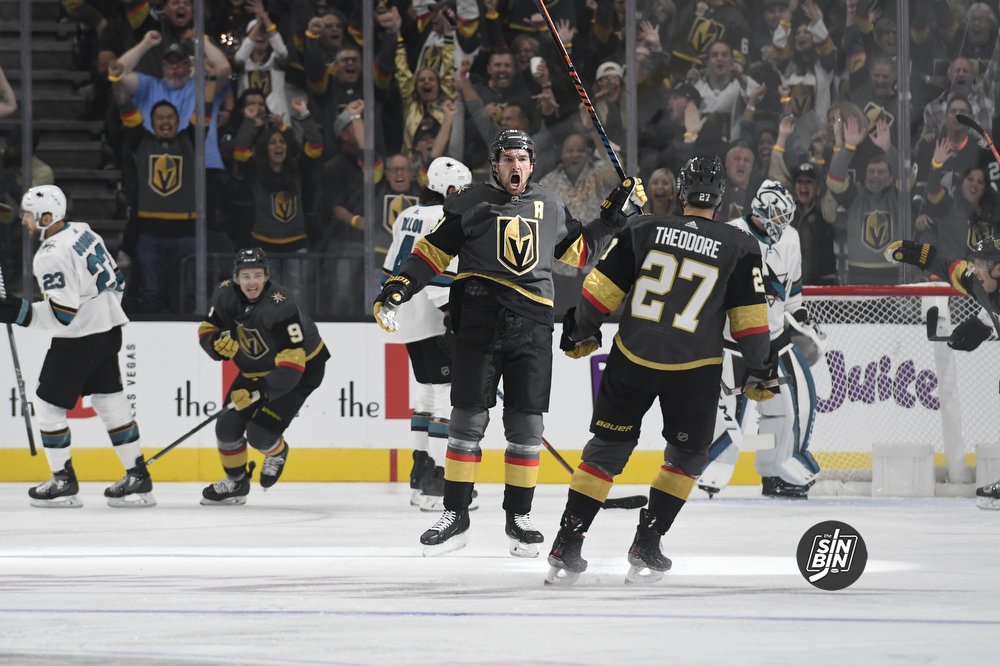 If the Golden Knight fan base ever needed a regular season victory, it was this one. After the nightmare that was Game 7 ending the previous season, the pent up anger from the summer all came out on Opening Night. Like seemingly every Sharks/Golden Knights game, Vegas scored in the first five minutes, and then again in the first 10 but it wasn’t a cakewalk as San Jose cut the 2-0 to 2-1 in the 1st. It was Cody Glass’ first career goal in his first career game that gave Vegas the cushion they needed. The only thing this game was missing was an Evander Kane ejection, but that’s only because that happened a few nights earlier when the two teams met in the preseason leading to Kane being suspended for the first three games of the year.

There’s always something special about comebacks, but it’s even more special when a team manages to tie the game, take the lead, and then seal it all within a minute. Three goals on 53 seconds changed a game from what would have been a rough loss to a massive win. At the same time, it essentially buried the Flames’ season.

With a chance to clinch the Pacific Division and raise the first banner into the rafters of T-Mobile Arena, the Golden Knights played a seesaw battle through the first two periods. Vegas had leads of 1-0 and 2-1 but the Sharks battled back to tie the game twice. Then, while shorthanded, William Karlsson scored the most impressive goal of the year, and his 42nd of the season, to give the Golden Knights the division-clinching win.

The introduction of VGKD 2.0 didn’t go as swimmingly as the Golden Knights coaching staff had hoped as they fell behind 3-2 after jumping out to a 2-0 lead. However, a miracle goal with 0.3 seconds left on the clock sent the game to OT and then a 2-on-none break in the extra session sealed the deal. It stands as the turning point of the season and depending on how the rest of the year goes it could end up going down as the most influential game in franchise history. 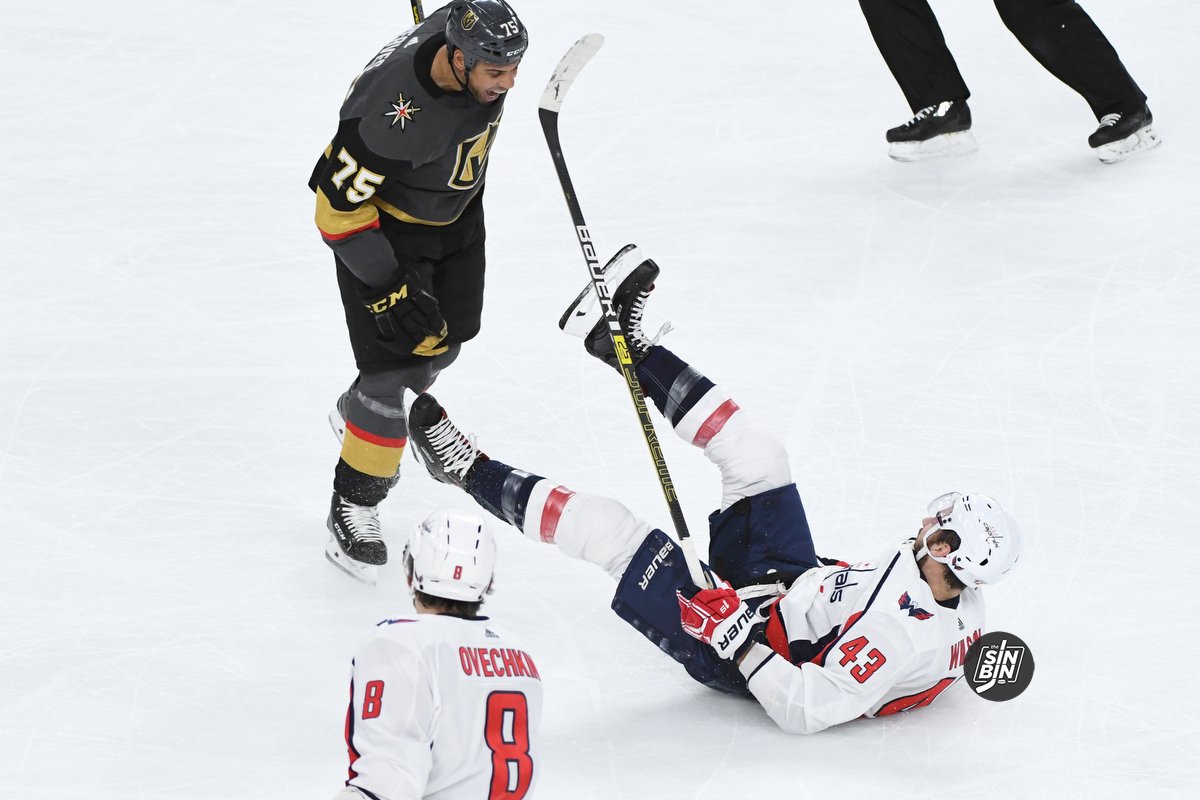 Very rarely do games live up to the hype going in. The Golden Knights had quite a few scores to settle and they managed to do about all they could inside of a regular season game. Tom Wilson vs Ryan Reaves went in the favor of the home team, Nate Schmidt scored a game winner, and the Golden Knights took the regulation win. Not to mention, in terms of actual hockey games, this one was about as good of one as you’ll ever see. 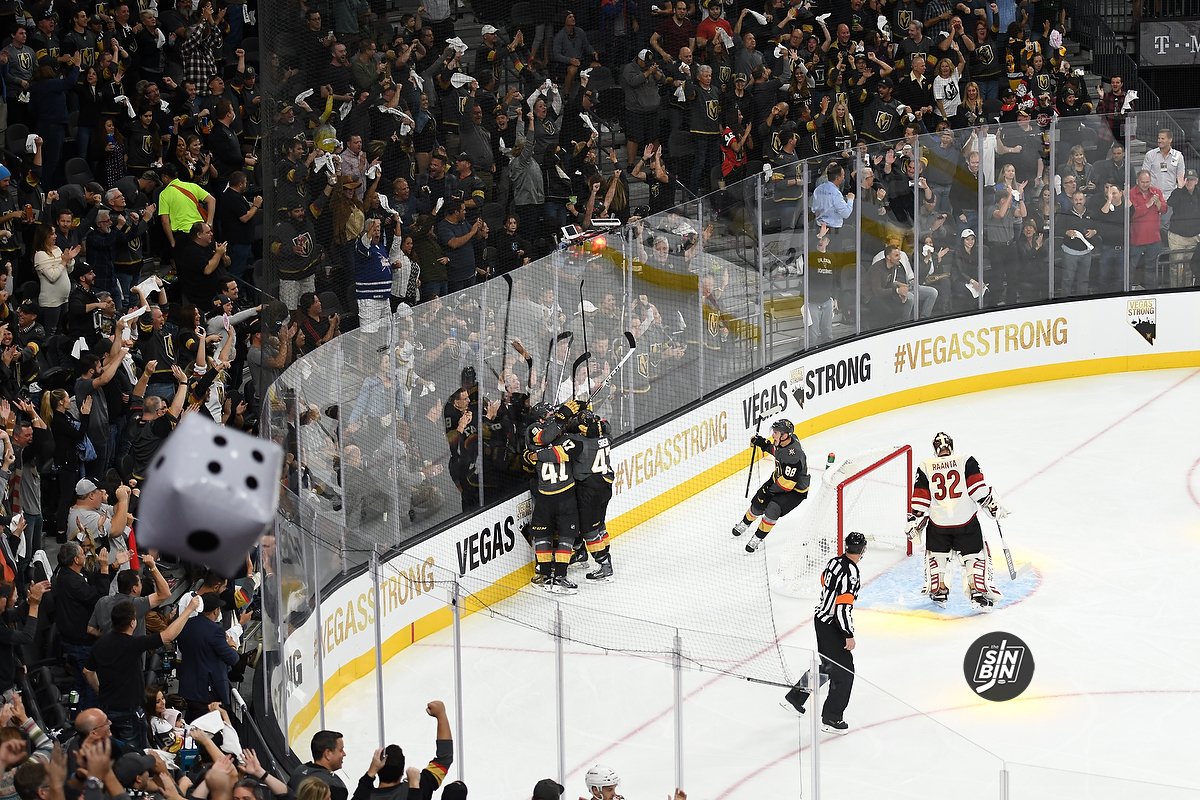 I’m well aware of the reasons why everyone wants this one to be higher on the list, but the hockey game itself wasn’t very good. Of course the moments at the beginning of the game will stay with us forever and the pregame was the best in sports history, but 4-0 in the 1st period isn’t exactly a barnburner of a game. Plus, I’ll still challenge the fact that they “had to win that game.” Looking back knowing that they did, it’s easy to say and it’s great they did, but had they come out flat and gotten run over, it really wouldn’t have made any difference as the pregame ceremony was always the most important part of the night. Don’t get me wrong, it will forever live on as one of the greats for this franchise, but compared to many others, the game itself wasn’t on par with any on this list and really didn’t matter in the grand scheme of things.

The Blues have been a pain in the side of the Golden Knights for a while. St. Louis had beaten Vegas four straight times and the Golden Knights had never (still haven’t) beaten the Blues in regulation. An absolutely miserable 1st period dug Vegas a 3-0 hole and the first half of the 2nd wasn’t much better. Then, they started to win puck battles in front, came all the way back to tie it and eventually grabbed the lead. Former Golden Knight David Perron netted the equalizer in the 3rd before Vegas had a chance to win it in regulation with a late power play. It came up short, but Chandler Stephenson used an excellent backcheck to help spring himself on a breakaway and score the first OT goal of his life. The first time Vegas had ever overcome a three-goal deficit, and the first time in 2019-20 they had overcome a two-goal deficit to win a game. Also, a game they may have needed to shut down the “can’t beat good teams” crowd.

This one was all about legitimacy. Vegas was rolling through their 1st year, but there was always a sense that the train could come off the tracks at any moment. A home tilt against the Lightning appeared to be that moment as Tampa jumped out to a two-goal lead at the end of the 1st. But, Vegas fought back in the 2nd to tie it with goals from Neal and Marchessault. Haula gave the Golden Knights the lead, but they gave it back with about four minutes left in the game. Then, Shea Theodore’s defining moment won it seconds before the clock expired. The building was on fire and there suddenly was a real belief that this team is 100% for real.

Five days after the worst day the city has ever experienced, the Golden Knights stepped on the ice for real for the first time ever. No one had any idea what to expect, including the players, coaches, and front office of the Golden Knights. It was a tough opponent, in a challenging building on their opening night, and it really felt like the Golden Knights had little to no chance to win the game. As it played out, it started to look that way as well with the Stars pouring it on through the first two periods. Fleury was incredible throughout with 45 saves and 22 in the 3rd period and Neal shocked the world (himself included) when he scored a game-tying goal and game-winning one in the 3rd period. The Golden Knights became the first team since 1992 to win their franchise opening game and it will probably forever stand as the most shocking victory in team history.