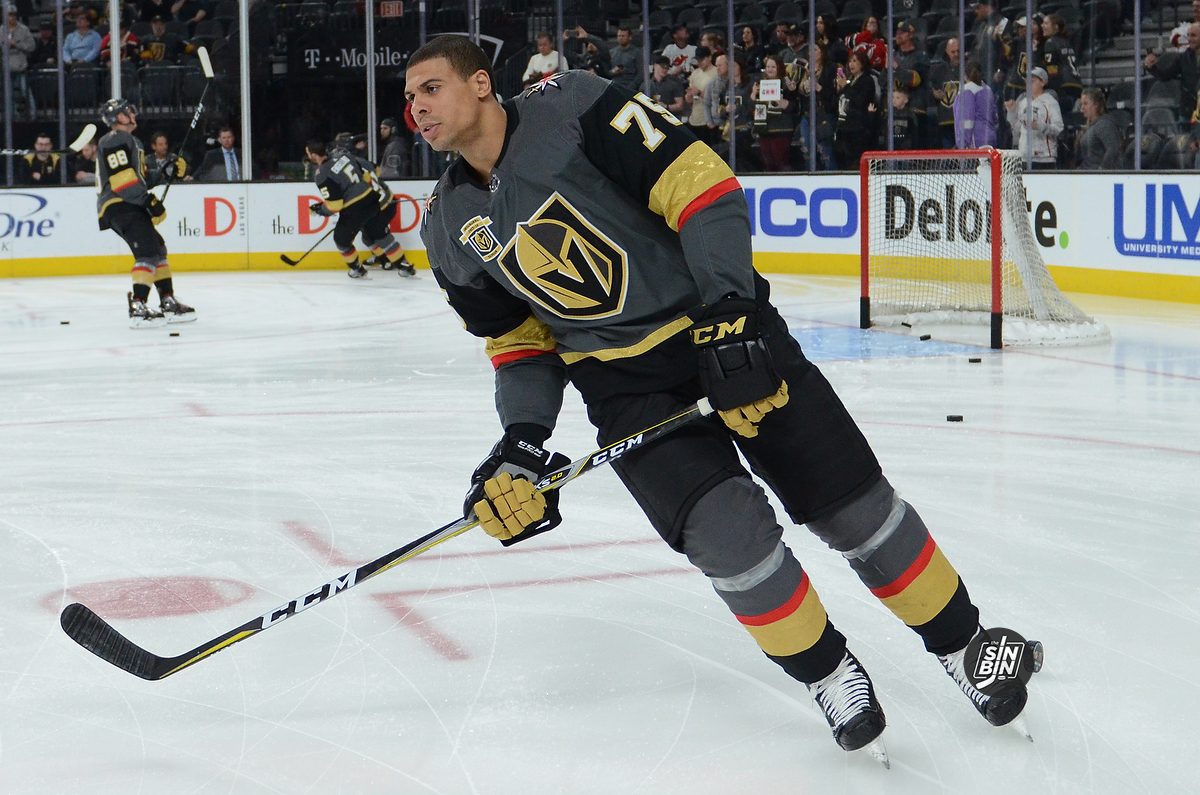 He was added to give the Golden Knights depth for the playoffs, now that they are here, will he even play? (Photo Credit: SinBin.vegas Photographer Brandon Andreasen)

Due to the string of injuries down the stretch and a slew of maintenance days over the final week, the All Star head coach Gerard Gallant has never had a full complement of players in which to choose his lineup. However, as the team prepares for a first round matchup with the Los Angeles Kings, it appears the Golden Knights have just about everyone healthy, which means choices for Gallant.

The top six is almost a guarantee to be set as it has for much of the season. A first line of William Karlsson, Jonathan Marchessault, and Reilly Smith, and a second line of Erik Haula, James Neal, and David Perron.

Using our judgment here at SinBin.vegas, we believe Alex Tuch, Cody Eakin, Pierre-Edouard Bellemare, and Tomas Nosek are also all guarantees to be in the lineup come Game 1. That leaves two spaces open that need to be filled with a group of 5 players. Those players are Tomas Tatar, Ryan Carpenter, William Carrier, Ryan Reaves, and Oscar Lindberg needing to fill roles as third and fourth line wingers.

At the trade deadline, Geroge McPhee added Tomas Tatar to be the third line winger with Eakin and Tuch. Due to the injuries, he has bounced around lines and his play has never quite lived up to what was to be expected of him. However, now that the playoffs are here and the top six are all expected to be back, Tatar will almost certainly find his way into the position he was brought to play in and draw the start against the Kings.

That leaves us with four guys to fill one vital role for the Golden Knights, fourth line winger. On the other 11 forwards, we’ve got a pretty strong idea, on this one, we’re clueless as to which way Gallant will go. So, we’ve put together a list of pros and cons for each of the potential option and then took our stabs at who each of us believes will draw into the lineup on Wednesday.

Pros: We all know what Reaves brings to the ice. Love it or hate it, he can be effective. Over his career, he dressed for 36 of 58 playoff games his teams played in. Last season, he played in all 11 games adding 42 hits, nine blocks and eight penalty minutes. Reaves was brought in just in time for the home and home with LA. Possibly a sign that Gallant could decide to go with Reaves in the first round.

Cons: Lack of speed, finishing ability, and potential to slow down transition game. The Golden Knights high tempo could earn Reaves a scratch or little TOI. His forechecking ability has led to penalties, specifically in the two games in which he played for the Golden Knights against the Kings. He’s considered a playoff type player, but his career record in the playoffs is 15-21.

Pros: Lindberg played all 12 playoff games for the Rangers last season. New York was 3-0 in the postseason when Lindberg recorded a point, including a game winner in the second round of the playoffs. His FOW% is a strong 52.6%, and even better in tight game situations. Lindberg’s 5-on-5 close FOW% is a whopping 57.7%. Add in his penalty kill ability and he makes a good case why he should suit up against the Kings.

Pros: We all love Carrier’s play. It’s gritty, tough, forces opponents to break character and shows skill once in a while. When all healthy, the Bellemare-Nosek-Carrier line had an impact on the game most nights. He was the perfect blend of speed and physicality. Although limited to 37 games, Carrier matched career highs in shots, hits, blocks, and takeaways.

Cons: Like the other depth forwards, Carrier brings very little offense aside from his ability to draw penalties. His points created per game (.08) is nonexistent. So his impact in the playoffs would likely have to come from his deep offensive forechecking ability. Carrier has missed significant time, has no playoff experience and has arguably the same skill set as some of Gallant’s other options.

Pros: Carpenter doesn’t have any NHL playoff games under his belt but he has played in 23 AHL postseason games. He had 22 points (11 goals, 11 assists) over three Calder Cup playoffs. Last season with the San Jose Barracuda, Carpenter was +6, with 17 points (9 goals, 8 assists) in 15 games. As a Golden Knight, the forward is always giving his full effort on the ice creating scoring chances, and making smart decisions in the neutral zone. Carpenter has handled a steady dose of faceoffs as well. Also, he’s been able to help out on the penalty kill.

Cons: Carpenter started off hot, but has been offensively ineffective over the past month and a half. Although his shifts, TOI, and total shot attempts haven’t dipped his points per game has. Carpenter is an unknown in the NHL playoffs and it could hurt his postseason lineup chances. Despite the affection, his play has to convince the head coach. Not the fans.

We've made our picks (https://t.co/85RYSFnQGR), now it's time for you guys to chime in.

Who do you think should be the 12th forward for the Golden Knights for the game on Wednesday? (The other three would all be scratched)