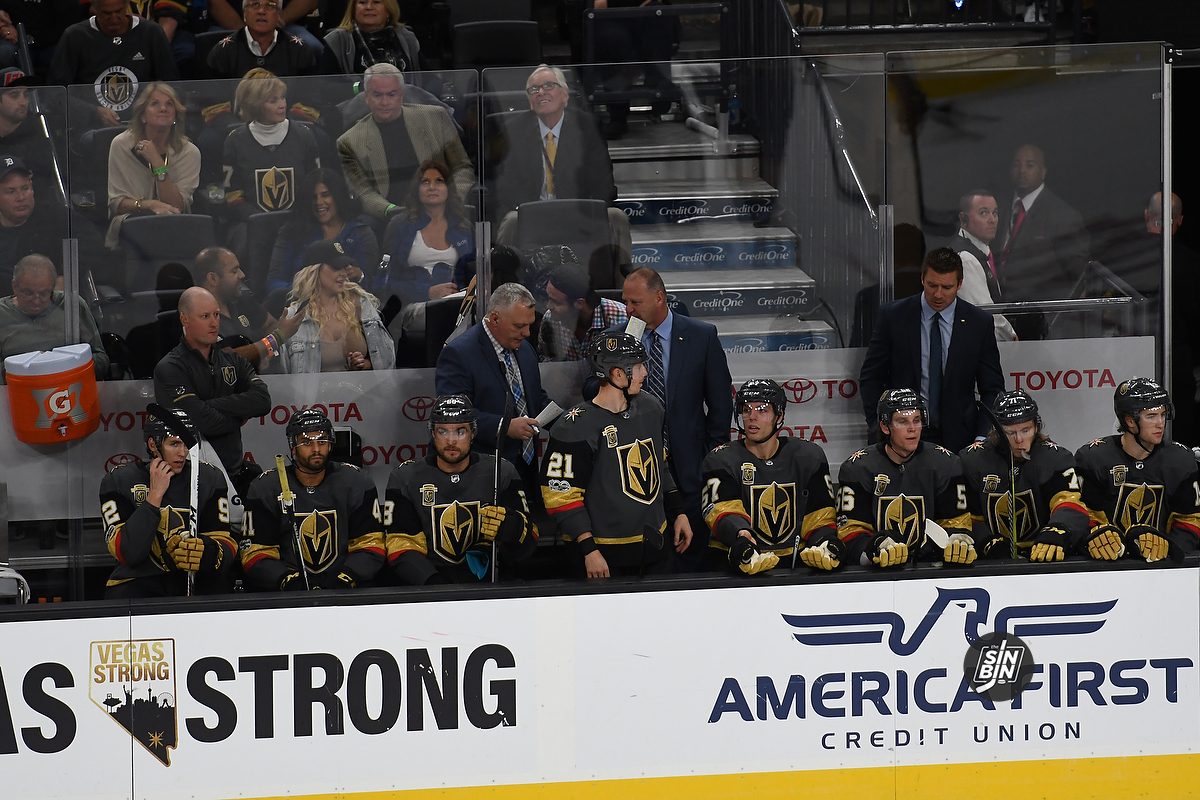 This picture sums it up The Creator’s style perfectly. In the picture, but not in the way. (Photo Credit: SinBin.vegas Photographer Brandon Andreasen)

It wasn’t an officially stated goal, but one of the most impressive accomplishments the Golden Knights achieved in their first season was truly becoming an NHL team. From the moment the puck dropped to the end we’re still trying to forget, there was never a feeling that the Golden Knights, or Vegas, was new to this. The building felt like an NHL arena, the fan base had the same (or more) passion as any other, and both the on and off ice products matched those of places that have been playing hockey games for decades.

Sure there were quirks like the opening “show” or the drumline, but there wasn’t anything a hockey fan can pinpoint and say “that’s something only an expansion team would do.” NHL.com columnist Nick Cotsonika put it as simply, but powerfully when he told me, “it feels like this team has been here forever.” That’s a testament to the entire staff, top to bottom.

However, there is one guy who is new to the NHL in every sense of the word and he’s not trying to fit in.

I guess I’m a different type of owner. I like to be with the guys and the coaches and the hockey staff, learn as much as I can, interchange with them, goof around with them, that’s kind of my style. Most owners don’t do that. I believe the players like it. I believe I had some small piece in our success and I’m going to keep on doing it and we’re going to get better. –The Creator on Vegas Hockey Hotline on 6/22/18

The owner of the newest franchise might be the most hands-on owner in the entire league. He gave locker room speeches. He ate meals with the team regularly. He bought a ping pong table, a dart board, and a bubble hockey machine because he heard players mention they “needed” them. He even arranged for car washes and detailing to take place in the parking lot of City National Arena because Marc-Andre Fleury mentioned one time that he didn’t have time to clean his car.

Then, when the players weren’t using it, he went military style on them in a way only an owner like him could.

So a couple of days later I had a meeting with the guys and I said, “It’s like the military. Use it or lose it.” I told them, “If you don’t use that car wash and detailing, I’m pulling it because I’m not going to have these guys just sitting around.” The next day there were 17 cars lined up. –The Creator to The Hockey News

He’s different, in a good way. I’ve talked to plenty of players about the owner and they all seem to genuinely enjoy his style. Where most hands-on owners want to be one of the guys, The Creator actually seems to have become one of the guys. So much so that there’s a “team policy” in which calling him by the wrong name costs you a pretty penny.

I got Karly (Karlsson) after he got his award because he said ‘Mr. Foley’ on the stage. He came back and I said, “okay, you know what that is?” He looked at me and said, “uh, yeah, thousand bucks.” -The Creator

With a normal owner that would be no problem because players rarely see him/her, but with The Creator (we’ve never called him Mr. Foley) that’s not exactly the case.

He’s around all the time, but he doesn’t tell you what to do. He asks a lot of questions about hockey. He just wants to help the team win as much as he can. -Gerard Gallant

The Creator has an uncanny ability of being heavily involved, while not really being involved at all. That’s the genius in his management style. He works incredibly hard to put the right people in the right place, then he gives them the responsibility to do their job the way it needs to be done. All the while, he’s hovering over every tentacle of the business making sure it’s up to snuff. It’s a healthy mix of micro and macro management styles, and it works.

When he first popped onto the scene in Las Vegas he wouldn’t go 20 words without saying “Playoffs in 3, Cup in 6.” After the Expansion Draft, he was feeling confident and changed it to “Cup in 5.” If you talk to him now, he’s probably going to use the word “dynasty,” at some point in the conversation, and just like most did with the idea of bringing a hockey team to Vegas, and they did about the three and six mantra, people will laugh and act like it’s ridiculous.

But it’s not ridiculous because of who is saying it. If it were Mr. Gallant, Mr. Marchessault, or Mr. Boehlke saying it, laughing would probably be a fair response, but with Mr. Fo… The Creator, it’s not a laughing matter.