At Friday’s practice, the Golden Knights spent a majority of their time working on the power play, specifically five on four. Obviously, we thought it was because Vegas was unsuccessful on their last 16 PP chances, but when asked, head coach Gerard Gallant disagreed.

It was planned, three or four days ago. So it wasn’t because we were 0 for 7 last night. -Gerard Gallant

The key word after Thursday’s preseason loss to Colorado was “simplify.”

We have to find our niche and simplify and have that five on five mentality. Sometimes when you’re unfamiliar you have to simplify and shoot the puck instead of making the extra pass.- Cody Eakin

We tried to make the fancy plays, the crossing plays, and we weren’t shooting the puck. The last two or three power plays we started getting some point shots through and getting some rebounds. When you do that and establish a point shot, some of those seams open up later on. But it was slow, we weren’t attacking a lot on the power play. -Gallant

In preseason you want to work on it, and try and make pretty plays. You do have to practice good habits, and sometimes just get the puck to he net and get those ugly goals. You’re not always going to have pretty ones. -Reilly Smith 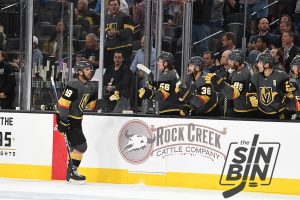 While, it’s only preseason, and man-advantages are opportunities for teams to work on things, going scoreless on 16 straight power plays is a bad trend heading into the regular season.

Only in hockey can words like cute, fancy, or pretty imply something bad. Weirdos.