The Golden Knights got off to a great start against the Red Wings in Detroit. Star center Jack Eichel tapped in a one-time pass from linemate Chandler Stephenson 1:04 into the game. Vegas held the Red Wings scoreless and skated into the 1st intermission with a 1-0 edge.

Jonathan Marchessault doubled VGK’s lead early in the 2nd period, scoring his first goal of the road trip on a Golden Knights power play. Detroit got within one with a PP goal of their own, but the Golden Knights weren’t finished in the middle frame. After committing a hooking penalty, Phil Kessel exited the box and scored his 5th goal of the season on a breakaway. The visiting Golden Knights held a 3-1 lead after 40 minutes.

Late in the third the Red Wings decided to pull their goaltender and Reilly Smith took note. Smith took a long-distance shot from the neutral zone to ice the game for Vegas. The Golden Knights picked up their second win on the road trip but more importantly, the team lost Eichel to an undisclosed injury in the final period. VGK Coach Bruce Cassidy didn’t have much of an update on Eichel after the game and said the center was being evaluated.

The Golden Knights record improves to (18-7-1) with their 4-1 victory in Detroit. Vegas will wrap up their road trip on Monday in Boston to take on Cassidy’s former team. Puck drop against the Bruins is scheduled for 4P PT. (Recap by Jason)

The Golden Knights continued their four-game road trip with a matchup against the Penguins in Pittsburgh. Vegas got off to a good start, scoring two goals in the opening period. Jack Eichel opened the scoring with his 12th goal of the season and Reilly Smith doubled Vegas’ lead on the power play. The Golden Knights held a 2-0 road lead heading into the 1st intermission.

Pittsburgh worked their way back in the middle frame, outshooting and outscoring Vegas. The Penguins evened the score 2-2 after 40 minutes played.

Special teams would come into to play in the final period for both teams. Shea Theodore regained the lead for Vegas with their second PP goal is the game. However, the Penguins would score on the man-advantage as well and eventually took the lead for good minutes later.

The Golden Knights record drops to (17-7-1) losing 4-3 in Pittsburgh. Vegas will make a short visit in Detroit for a matchup with the Red Wings on Saturday. Puck drop from Hockeytown is scheduled for 4P PT. (Recap by Jason)

Since it’s the first day of December, what’s everyone’s favorite Christmas movie before this game gets started.

The Golden Knights hit the road for a four-game road trip to the Eastern Conference starting in Columbus. Vegas took a 2-0 lead in the opening period, receiving goals from William Karlsson and William Carrier.

Columbus scored the only goal on the 2nd period, cutting Vegas’ lead in half.

The Golden Knights record improves to (17-6-1) defeating the Blue Jackets 3-2 in shootout. Vegas will travel to Pittsburgh for their second of the four-game road trip. Puck drop against the Penguins is scheduled for 4P PT. (Recap by Jason)

Close up of Eichel shows two spots for stitches. Saving grace is that it looks like the puck sort of hit him flat. Lucky he doesn't have a broken eye-socket.

The Golden Knights were looking to bounce back against the Vancouver Canucks after losing to the Seattle Kraken on Friday. The Canucks got off to an early start, scoring the only two goals of the first period. Vegas took three 1st period penalties that Vancouver took advantage of.

Trailing 2-0, the Golden Knights tried to stop the bleeding, but they continued to commit costly penalties. The Canucks scored three times and took a commanding 5-0 lead after 40 minutes of action.

The Golden Knights record drops to (16-6-1) losing to the Canucks 5-1 at T-Mobile Arena. Next, Vegas will pack their suitcases for a four-game, ten-day road trip. Puck drop against the Columbus Blue Jackets is scheduled for 4P PT on Monday. (Recap by Jason)

Optimistic intern is making an appearance. I’ve never seen a 5 goal comeback in person so tonight would be a cool time to see it.

The optimism is fading. https://t.co/4gswlBl2DR

(Analysis/Tweets by Alex the Intern)

The Golden Knights hosted the Seattle Kraken for the first of a back-to-back set at T-Mobile Arena. The Kraken opened the scoring 2:38 into the game and took a 2-0 advantage six minutes later. Vegas worked their way back and evened the score at 2-2 before the 1st intermission.

Like the 1st period, Seattle came out strong and scored in the opening five minutes of the middle frame. The Kraken would later double their lead late in the 2nd period and held a 4-2 lead after 40 minutes of action.

The offense dried up for both teams in the 3rd period. Vegas went scoreless over the final 40 minutes, mustering only six shots on net in the frame.

The Golden Knights record drops to (16-5-1) falling to the Kraken 4-2. It was Vegas’ first loss to Seattle in franchise history. The Golden Knights get right back to work tomorrow night against the Vancouver Canucks. Puck drop is scheduled for 7P PT. (Recap by Jason)

Too much turkey last night

@SinBinVegas Everything just looks so hard for us tonight, and the Kraken seem to be flying all over the place.

They’ll be more awake after Cassidy yells at them 🤣

The Golden Knights returned home from Western Canada for a Thanksgiving eve matchup against the Ottawa Senators. Former Senator Mark Stone gave his current team a 1-0 advantage with a 1st period power play goal. Ottawa scored on the PP as well locking in a 1-1 tie after the opening twenty minutes.

This season’s most surprising player William Carrier weaved in and out through Ottawa’s defense to regain the lead for Vegas late in the middle frame. Carrier’s 7th goal of the season made it 2-1 Vegas after two periods.

The Golden Knights record improves to (16-4-1) defeating the senators 4-1. Vegas will next face Seattle on Friday evening from The Fortress. Puck drop against the Kraken is scheduled for 5P PT. (Recap by Jason)

The Golden Knights took a short trip from Alberta to British Columbia for a road matchup against the Canucks. Vancouver thought they had taken the first lead of the game but coach Bruce Cassidy challenged the goal and the officials ruled in his favor. The game was scoreless after the opening twenty minutes.

Vancouver officially took the lead midway through the middle frame waking up Vegas’ offense. Jack Eichel flung the puck on net and Mark Stone deflected in the game-tying goal. Less than a minute left, William Carrier scored the go ahead goal assisted again by Eichel. The Golden Knights carried a 2-1 advantage into the 2nd intermission.

The Canucks came out red hot in the final frame, scoring three straight goals in the opening 6:11 of the period. However, Vegas stormed back. Trailing 4-2, Carrier got his team within one, scoring his second of the game and Reilly Smith jammed in the equalizer. The Golden Knights believed they had taken the lead but Mark Stone’s goal was waived off. Minutes later Alex Pietrangelo scored cleanly for the game winning goal.

The Golden Knights record improves to (15-4-1) defeating the Canucks 5-4 in Vancouver. Vegas will next face the Ottawa Senators Wednesday night from the Fortress. Puck drop is scheduled for 7P PT. (Recap by Jason)

3 out of 4 points on the trip. Vancouver not a great team, and VGK not playing their best, but you have to like the offensive zone work in that 3rd period. If only 81 could have buried one of those empty netters! 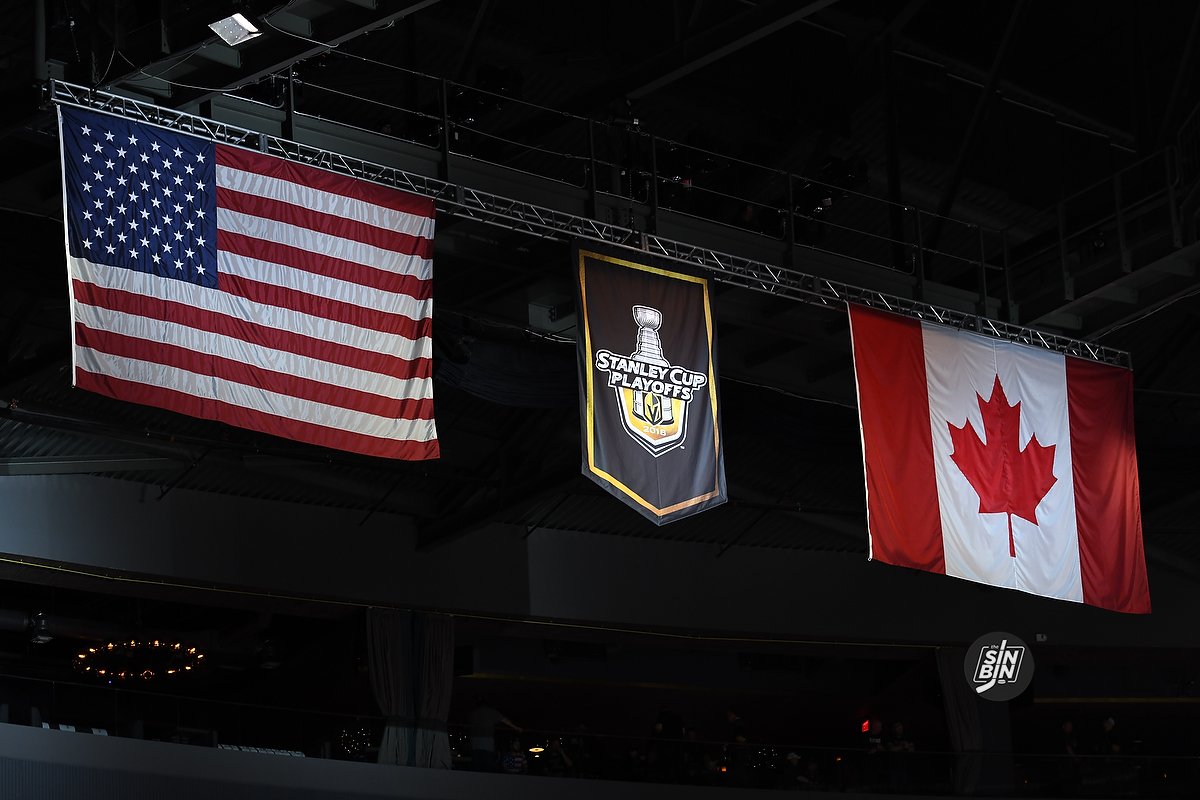